If you have a sharp and focused group of players this game can last a surprisingly long time. Try to keep the pace of play rapid, sometimes guests will take forever trying to get it right.

The Set Up: Have your guests sit in a circle in a large open area and select a random player to start.

This continues moving left around the circle with each person repeating what the previous person said and adding an additional sign of love until someone forgets a previous answer, messes up the order or in some way makes a mistake. That person is out and leaves the circle. The person to the left of the person that is now out starts the game over again from scratch. Continue playing and eliminating players until only one person remains. That person is a very deserving winner.

If the Game is Taking Too Long: Sometimes this game can bog down with guests taking long turns. If your game starts to slow down or even from the very beginning you can add a five second rule. So if any player on their turn goes for more than 5 seconds without adding to the list they are eliminated.

This game is an excellent choice to lead off your Valentine party. Since you play it passively throughout the event, it is a good idea to start it as soon as possible.

The Set Up: The first thing to do is to select a taboo word, meaning a word(or short phrase) your guests are not allowed to say. The most obvious choice is “Love” which will work just fine, but if you wish you can choose another word like Valentine, heart, kiss, chocolate, or anything you wish that is likely to be said frequently at your party. Now you need tokens. Clothespins are commonly used since they are easy to clip onto and remove from clothing without doing any damage. For Valentine’s Day another option is a heart on a string to hang around the neck.

The game continues throughout the party until a predetermined time close to the end when the game is called to a halt. The person who has the most tokens at the close of the game is declared the winner and gets a prize.

Craft Option: You can add red or pink ribbons, stickers, paint or anything else you can imagine to your tokens. Since guests will be wearing them throughout the party , many people choose to fancy them up. 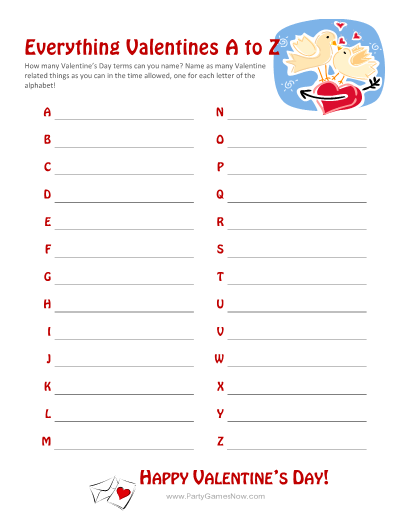 How much do you really know about Valentine’s Day? This game challenges your knowledge of everything Valentine A to Z! Directions Download the game sheet, and print out one sheet for each player. You will then give everyone about 8 minutes on the clock to fill in as many Valentine-related words as they can, one […] 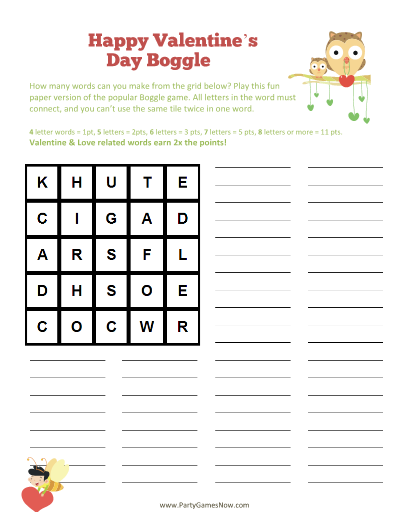 This printable game is played just like the real game Boggle, but is already setup and has a Valentine’s Day holiday twist. Directions Printout and give every player a copy of the boggle game sheet and a pencil. Make sure to pass the game page to each player up-side-down so no one has an advantage […]

Cut hearts out of red construction paper, making sure you have one for each child. On one side write out an action that can be performed while moving like walking backward or hopping like a bunny. Divide the kids up into two teams and have them line up on one side of the room. On the other side of the room place the action hearts with the action facing down in two pile, one pile for each team.

Countdown “1, 2, 3, GO!” and the first kid in each line runs to their stack of action hearts and reads the top one. That child then returns to his or her team performing the action written on the card. Upon return the first child slaps hands with the next child in the line and then sits down. The second kid then runs to get the next heart in the pile and performs that action back to his or her team. The process is repeated until one team works all the way through the line. The first team to finish is declared the winner and awarded a small prize.

-With a smaller number of kids you can have them work through the the line twice(or more) before declaring the winner.
-If you have an odd number of kids then put on your comfortable shoes and take a turn yourself to even the teams out.
-With younger kids you might consider having an adult stand next to the hearts in case one of the children has trouble reading the action.

Cut large hearts out of red construction paper and laminated them. Tape the hearts to the floor in a circular pattern, one for each Valentine party guest. With each kid standing on a heart, start the game by playing music. The kids walk around the circle of hearts as the music plays, when the music stops they need to find a heart to stand on(one kid per heart) or they are out.

The first time there should be enough hearts for everyone to give them a chance to understand the game without fear of elimination. After the first round remove one heart and play again, whoever is not able to find a heart is out. Remove another heart and repeat until you have a winner.

Take a red poster board or large piece of paper and cut it out into a heart shape being sure to mark the center point. Then make or printout enough arrows for each kid. If you print them out and have enough scissors you can have the kids cut out their own arrows or optionally you can let the kids draw their own arrows and cut them out themselves. If you are looking to add an addition fun project for the kids, provide crayons or colored markers and let them decorate the arrows.

Place the heart on the wall at a height where the kids can easily reach it and clear out any potential obstruction in the area. Put double sided tape on the back of the arrows and one at a time blindfold the kids and spin them around three times leaving them facing the heart and ask them to stick the arrow on the center of the heart. Be sure to mark each result on the heart making note of the name of the kid after each child has a turn since tape is not perfect and the arrows can fall off later. Once every kid has had a turn the closest arrow measuring from the pointy tip to the center wins!

Take several pieces of red construction paper and cut out identical hearts. You can decorate the hearts, but if you do be sure to keep them as close to carbon copies of each other as possible. If you can printout multiple copies of the same heart on construction paper that works even better.

Take all of the pieces and mix them up, then pass them out one to a child. Now turn the kids loose and have them try to find the person with the their respective piece so they can fix the broken heart on Valentine’s Day. Once they find their partner have them tape the heart back together and award prizes to all the kids as they finish.

Afterwards you might consider explaining to the kids that there will be times in their lives when family members or loved ones are sad, they have a broken heart. When that happens it is important try and help them mend their broken heart.