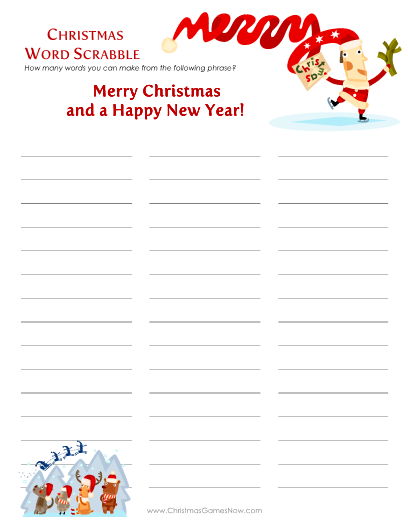 Kids will get a kick out of finding words out of that well know Christmas phrase “Merry Christmas and Happy New Year!” How many words can you make, how many 8 letter words? It’s actually harder than it looks!

Print out a word scrabble sheet for each player and pass them out with pens or pencils. Set your clock for about 5-10 minutes and have the guests try to make as many words as they can out of the phrase (You can use your own phrase or words, too, by just writing it out and placing it in view of the players, such as “Mrs. Jones’ Class Party!”).

For adults or older kids have them only use the number of letters shown (like not allowing the word “kissing” if there is only 1 “s”), but to make it easier for the younger kids, or those just learning to spell, they can be allowed to use any number of the letters shown when making a word (like allowing the word “kissing” even though there is only 1 “s”),.

Everyone will have a holly jolly time trying to come up with the best Christmas words, and kids, teems and kids will all be able to play since the game scales to the spelling level of the players.