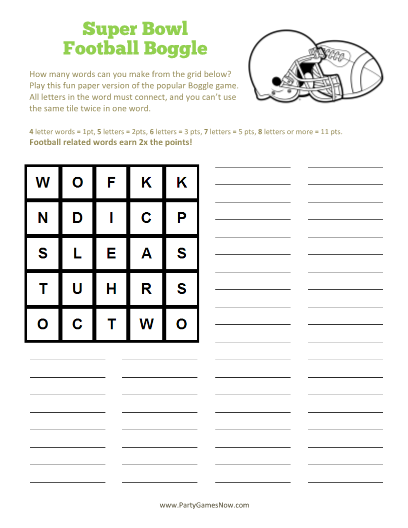 Football Boggle Game
Print This Game
($$$) This is a FREE game

This printable game is played just like the real game Boggle, but is already setup and has a Super Bowl/Football twist.

Printout and give every player a copy of the boggle game sheet and a pencil. Make sure to pass the game page to each player up-side-down so no one has an advantage of seeing the page first. Set a timer for 3 minutes and say “Go!” Players then turn over their game sheet and start looking for words.

Players must find as many words as they can by linking the letters up, down, side-to-side and diagonally, and then writing the words on the blank lines. You many only use each letter box once within a single word. In this football edition any Super Bowl or football related word is worth double the points.

Traditional Boggle Scoring Method: In Boggle, you can only earn points for a valid word if no one else has found the word that you have. So in order to determine which words can be scored, have one person read their list of words out loud. If any two or more players have that word, then the players must all cross it off their list. After the first player is finished reading their word list, then the next player should read through their list and the players must cross off duplicate words they read. Continues this around the room until every player has read their list and everyone has a list of unique words they have found. Now they should count up their word points.

Faster Scoring Method: This scoring method is a bit faster since you do not have to compare word lists, but you can end up with a few ties if you have a lot of people. Basically you just allow the players to add up all their words, no matter if anyone else has the same word and the highest total wins. This is a good way to play with children as well since they will all have a chance at scoring and no one will end up with all their words crossed off.

For ties have the tied players compare words among themselves (as in the original Boggle scoring method above) and only the unique words can score. The tied player with the highest score after that wins. You can also skip the tie breaker and have multiple winners allowing all tied players win a prize.

For example, if someone found the word FIELD the word would be worth 4 points (5 letters = 2 points, then double for holiday match). In order to receive the doubled football theme word points, the group has to agree that the found word is a themed word (such as BOWL for Super BOWL).