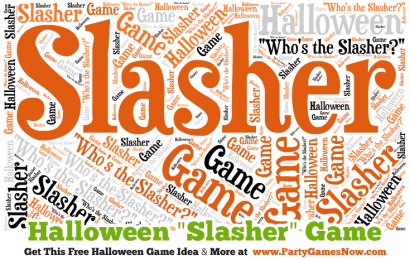 Nothing screams Halloween more than a good slasher coming after people with a large object, and since it’s Halloween this game will work really well, but without the bloody cleanup.

This game is really simple game many might have played in school, and it’s really fun for kids. Anyone playing will need to be able to wink in order to play the “Slasher”, but most kids old enough to play can wink.

Have the players sit in a circle and have them close their eyes. Have one person who is not playing walk around the circle and silently, without anyone else knowing, tap one player on the shoulder, this person is the Slasher. The players can then open their eyes.

When everyone has their eyes open they should be looking at each other to try to figure out who the slasher is. The slasher will need to wink at different players (one at a time) in the circle without anyone else but the selected player seeing the wink. That player has just been murdered by the slasher. When a player has been winked at, he or she should make a big dramatic effort of dying (this is the best part of the game, people really get into it sometimes).

The object of the game is for the other players to guess who the killer is before they get killed themselves. Whichever player guesses the identity of the killer first, or is the last person not dead becomes the next “Slasher”. This is a great Halloween type game and since there is no need for props or setup it can be played anytime or anywhere.

Halloween Who Am I? Adult Halloween Games