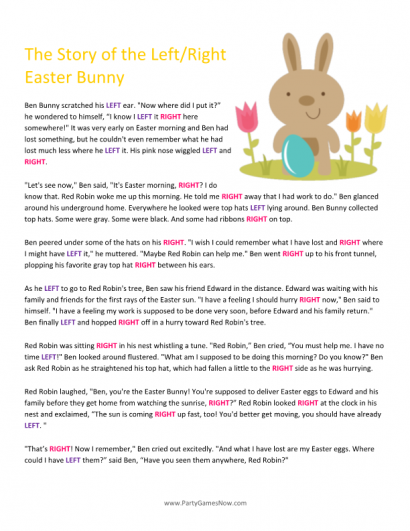 The Left/Right story game is a well known activity that is easy to setup and play for any age. All you need is one copy of the “Easter Bunny Left/Right Story” and at least one prize for winners. Best of all, no one will know who will end up the winner until the very last […]

The object of this game is for the guests to get as many jellybeans as they can within the time limit. The challenge is that they have to use chopsticks to get the jellybeans. If you have a wide age range of party guests you can have multiple contests, one for each group.

Place a large bowl filled with jellybeans in the middle of a table(preferably a round table). Setup the players around the table making sure to allow a lot of wiggle room since the game can get pretty hectic. Usually only four player can participate each round, so you may need to take multiple turn for everyone to get a chance.

Each participant gets a set of chopsticks and a bowl to place in front of them. Set a time limit of three minutes for the players to move as many jellybeans as they can from the center bowl to their bowl in front of them only using the chopsticks. If one drops on the table before it gets to their bowl they must use the chopstick to pick it up. Count how many jellybeans are in the bowl of each player at the end of the turn and keep a running list. Repeat the game until all the guests have played once. Everyone gets to keep the jellybeans they got during their turn and the person who had the most jellybeans in their bowl is the winner and keeps all the remaining jellybeans. If you had several contests for different age ranges split the remaining jellybeans between each of the winners.

Optional: If you have some kids that just too young to use the chopsticks but still want to be included in the game, let them play with the same rules but using a small spoon.

If your party has guests of a variety of ages it is a good idea to run multiple races, one for each age/skill level. The course can be shorter for younger kids and increase in length as the age of participants increase. Be sure to award a prize to the winner of each group and you can crown a grand champion with one last race featuring the winners of each group.

Burlap sacks are an excellent choice to use for your Bunny Hop Sack Race. They are durable so you can keep them to use for your Easter party next year and they are large enough for adults. For young kids burlap sacks might be too large so consider using pillow cases.

This game comes with a few important warnings. First, it is crucial that you clearly explain to any of your guests considering playing that there is a chance they will end up covered with raw egg. Also, this is a game that obviously should only be played outdoors. Finally, while you can play this game with kids it is not recommended. Sometimes children will think it sounds fun, but when they get covered in raw egg they become upset.

Standard Method: Fill a basket with one fewer hardboiled eggs than game players. So if you have ten participants, put nine cooked eggs in the basket. Add in one raw egg and mix them up. The eggs should all be undecorated or if decorated they should be similar enough that there is no way to determine which of the eggs is raw. Also it is a good idea to refrigerate all of the eggs, sometimes people can tell the raw egg because it is colder.

Have the players stand in a circle close to one another. Walk around the circle with your egg basket allowing each guest to select one egg. Once everyone has an egg, the players will turn to their left so that they are facing the back of the person next to them. Countdown One, Two, Three, Crack! and all of the players in unison will gently break their egg on the top of the head of the person next to them. One players will end up with raw egg dripping from their hair, that person is the “winner” and receives a well deserved prize(as well as a towel to clean up). If the game goes over well and you have eggs left you can play additional rounds.

Alternate Method: Play the game exactly like the standard version but the person who gets hit with the raw egg is eliminated. Reload your egg basket as before but with one fewer hardboiled eggs and play another round eliminating another player. Continue playing until there are only two participants left who will stand facing each other for the last round. The person who makes it all the way through the game without getting egged is the winner. If you have a large number of players you might consider using two or even three raw eggs per round to speed up the process.

Prank Method: Do all of the explanation and set up for the game exactly like the standard method so the guests think that one person will end up covered in raw egg. The surprise is that ALL of the eggs are raw! 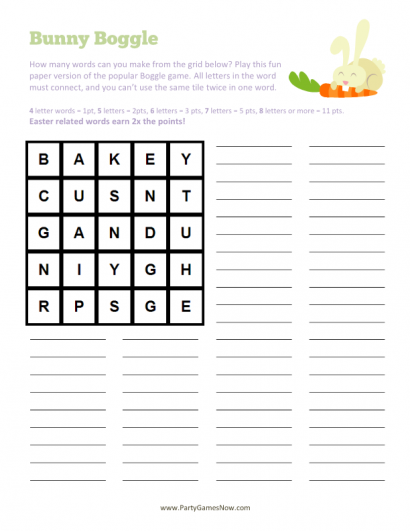 This printable game is played just like the real game Boggle, but is already setup and has a Easter holiday twist. Directions Printout and give every player a copy of the boggle game sheet and a pencil. Make sure to pass the game page to each player up-side-down so no one has an advantage of […] 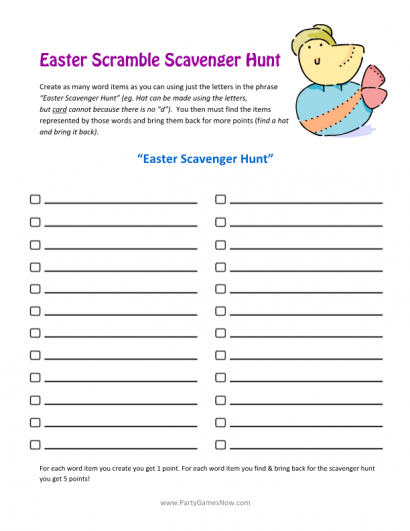 This is a great twist on your basic scavenger hunt, and really easy to setup last minute as you do not have to write clues or even have the items set up for the players. It’s all “on the fly” creativity. Directions Print out enough game sheets for the teams playing. Split your guests into […] 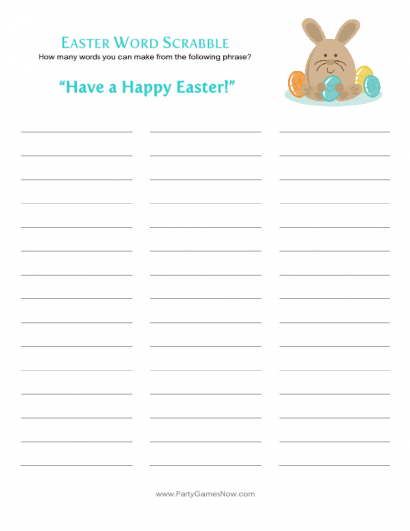 Kids will have a great time finding words out of the phrase phrase “Have a Happy Easter!” How many words can you make, how many 8 letter words? It’s actually harder than it looks! Directions Print out a word scrabble sheet for each player and pass them out with pens or pencils. Set your clock […]

Fill an Easter basket with loads of different small candies like jellybeans, foil wrapped chocolate eggs, and Hershey Kisses using lots of Easter grass to keep most of them hidden. You can also add a few larger items like a stuffed bunny or candy bars, but pay close attention to exactly how many items are in the basket.

At the start of your party place the basket on a table with slips of paper, pens and a cardboard box with an opening cut in the top. Challenge your guests to figure out exactly how many items are in the basket (no touching allowed). When they are ready to guess, they write their name and estimate of the number of items on a slip of paper and drop it in the box. The person closest to the actual number wins and gets the basket and all its contents as a prize.

-All words must be at least four letters.
-Words that appear as is in the phrase cannot be used, so “cotton” would not count because the word cotton is in the phrase.
-The singular and plural of the same root word both count. So both “tear” and “tears” would count.
-If the letter appears once in the phrase you can only use it once in your word.
-Four letter words are one point, five letter words are two points, and so on.
-Words related to Easter count double.

Set a timer for five minutes and turn your guests loose. Once time has expired have them exchange their answers with another player to add up their scores. The person with the most points is the winner.

If you have a sharp and focused group of players this game can last a surprisingly long time. Try to keep the pace of play rapid, sometimes guests will take forever trying to get it right.

The Set Up: Have your guests sit in a circle in a large open area and select a random player to start.

This continues moving left around the circle with each person repeating what the previous person said and adding an additional Easter present until someone forgets a present, messes up the order or in some way makes a mistake. That person is out and leaves the circle. The person to the left of the person that is now out starts the game over again from scratch. Continue playing and eliminating players until only one person remains. That person is a very deserving winner.

If the Game is Taking Too Long: Sometimes this game can bog down with guests taking long turns. If your game starts to slow down or even from the very beginning you can add a five second rule. So if any player on their turn goes for more than 5 seconds without adding to the list they are eliminated.